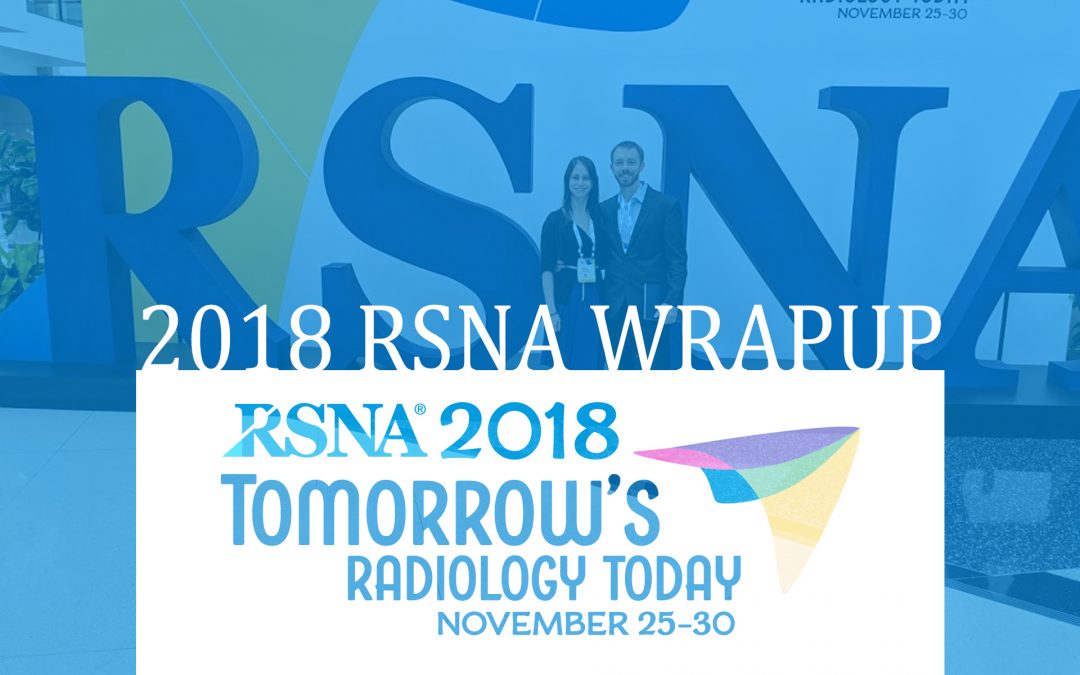 As always, there was way too much for any one person to see at the show this year. Like a lot of other teams coming to the show, our plane was delayed due to the blizzard. We got there a couple days late, but here’s the brief breakdown!

1. Machine learning was a hot topic.

This year was all about AI. Machine learning was on everyone’s mind. We all wanted to know if radiologists were going to be in the field in the next 5 to 10 years. From my perspective, everyone was dancing around the subject. No one wanted to come out and say it, and I heard a lot of “We’re just here to help the radiologists” and “With this new tech, it will just make their jobs easier.” But it’s no secret and we’ve all seen that residents are dropping out of their programs around the US at a record rate. I met with a Ph.D. doing a study with IBM Watson and while he was pretty sure that in the next 10 years things were going to change a ton. On top of that, new players showed up this year. In fact, even Google was there was their cloud AI platform, which we actually use on our MedRevUp.com system!

One of my favorite companies at the show was ScriptSender.com. Personally, I hate faxes, and I bet a lot of you do as well. It’s pretty clear that a lot of the medical community has never heard of email and tech like HISP is not moving fast enough. With Jim Burchfield’s ScriptSender you can at least stop faxing your reports to your referring providers. The report will now show up right in their EMR! I don’t know about you, but it’s the little things that really impress me, and I can think of nothing better than getting rid of faxes forever.

3. Business and clinical analytics are improving.

Across the board, the business, as well as clinical analytics are improving in RIS systems. In addition, we saw more businesses this year that just focused on pulling data out of RIS & HIS systems to create meaningful analytics. My favorite group for this was definitely HealthLevel.com. Parag Paranjpe gave me a 30-minute overview of his systems and I have to admit, I had some data envy.

4. Finally, someone is helping patients understand what is going on!

We met with The Holvan Group who make videos for patients that prep them for their visits. We actually looked at doing this at one point but abandoned it because it was going to be so time-consuming. It’s great to see that someone picked up the torch and is carrying it to the finish line! We were impressed with their videos and all the work they had put into it. Definitely worth a look.

5. RIS systems are opening their doors to new technology integrations.

It’s becoming evident to most (although definitely not all) RIS providers that they can’t do everything and they need to start opening their doors and systems to other companies for integrations. I was especially impressed with Mark Pavlakovich from MedInformatix when he talked about how his company had a policy of integration. This is a far cry from what we’ve seen in the past where RIS providers were a black box and weren’t interested in opening anything up. That said, I did meet a couple select RIS providers who were still black boxes. I don’t want to say who they were here, but shoot me an email and I’ll tell you.

We did the Augmented Reality experiences with Phillips and it was impressive. With their headset on, all a radiologists screens could be viewed and worked. It still has some time before it’s ready for commercial use, but it was pretty cool to get a peek into the future!

That’s me wearing an AR headset!

7. Voice recognition in transcription has come a long way and continues to get better and better.

As always, Nuance had some amazing tech. This year, I had the opportunity to sit down and talk to Terry Conway from M*Modal about their systems, and I was impressed. It was a small thing compared to the overall system, but what really got me was when he was demo the transcription on a female patient and listed the epididymis, it immediately popped up with a notice for a ‘gender check’. The level of automated error checking is getting more and more impressive every day. One of my favorite conversations at the convention was with Terry as he went through his thoughts on where the technology and radiology as a whole is going. I’ll try to get an article about that conversation out sometime soon.

8. New players from across the globe had some pretty cool tech.

There were several Japanese and Chinese companies we met that had some tech that we thought was pretty impressive. The smaller players are still struggling to enter US markets, but I think that in the next few years we’re going to see a lot more foreign tech coming into the US markets.

As usual, there was a ton more information than any one person could consume, and I didn’t even get to go to any of the talks since we were talking to everyone about MedRev (medrevup.com) the whole time. I really wanted to hit some of the bleeding edge talks on machine learning so I could learn and report back to you. But it will have to wait till next year!

See you at the next show!